This blog post is a case of having too many pics rather than not enough.  So I've split them up without any particular theme or nylon sermon--but I'm sure I can come up with one!  In fact, I just have.....  I know I've brought this up before under "The Great Nylon Tricot Mysteries of Life That I Don't Understand" category--sort of 2 parts this time around.  The first part involves the definition of the term "fetish."  Besides not liking that word because it just sounds creepy and clinical, there are so many different kinds out there.  I would get stuck with the most obscure--I mean toe sucking is WAY more popular, for instance, than nylon tricot.  However, I make the basic assumption that a fetish is usually based on some sort of visual stimulation of something maybe not always associated directly with sex.  Of course basic sex is technically just 2 (or more) naked people having sex using their sex parts to do it.  I guess that applies to solo sex, too.  Hand on penis (yours or other's / others'), a body opening with penis in it (usually other's) and either mutually or singly ejaculating.  The End.  Boring.  With a fetish there is some sort of enhanced pleasure from some additional object(s) or even the anticipation of said object(s) to enhance, prolong, or otherwise provide direct contact or just visual pleasure.  Unbuckling a guy's jeans, slipping your hands inside and discovering he's wearing a couple layers of silky nylon tricot and your hand is already sliding on his ass.  BOING!  The anticipation of what is to come rubbing your nylon covered cock on his, feeling his body sliding under / over yours and knowing he is into nylon enough so that you will both eventually be ejaculating into it sometime during the future nylon-play.  Wow, that's almost as good as it gets.  Seeing his nylon whatevers, feeling them slide around, knowing that you are also stimulating him, well, that's really hot!  Of course feeling his cotton boxer briefs instead of silky nylon isn't the end of the world as you can maybe "educate" him about nylon tricot and introduce him since he is probably not aware of it at all.  It's your duty!  Of course, it can also result in, "I hate that fuckin' plastic shit, let's get naked!"  At which point you can remember you left the oven on at home or just get through it and ghost him later.  Been there and done that more than once.

The 2nd part of this question is that if he does happen to be the "normal, regular" cotton wearing kinda guy who never thought or cared about what kind of underwear he had on (are there guys like that ??!!), well then this is your chance to do something about that.  I'd like to think I was a pretty good nylon tricot salesman in my day and maybe even had a lot of converts thanks to my planning and preparation ahead of time.  Your partner is not going to wait around for you to go rummaging around looking for that super silky Speedo you've been saving.  However, if you're gym bag just happens to have it partially on display.....   Of course, a possible help may have been the common availability of nylon tricot for men in the form of underwear, swimwear, shirts, shorts, and other items before even thinking about the even bigger availability (but more controversial) use of women's nylon tricot.  I actually never got further than nylon panties with another guy who may or may not have even known what was silking him off into ecstasy at the time or what I happened to be wearing in the dark that he was sliding up and down my shaft before I did the same to him. Sometimes it might have even been a nylon panty over a nylon Speedo--whatever works best!   Well, maybe I just read too much into availability because most guys (gay or straight) might just sum up the whole intro to silkiness with with a simple "feels silky" or even just "silky!"  By the time you were actually sliding that silkiness up and down their shaft and maybe over their head, they might not be able to get out more than an "mmmmmmm" or an "oooooooo" before they shot the biggest load of their life into whatever you were using on their manhood.  Once you reached that important milestone, the next time would be easier ("Let's get into something silky") or maybe no words would be even needed.....  Those cotton briefs just went flying and you helped slide up the nylon.  If it was something like a pair of shorts that slid over the attached liner (as were available in the 80's--sometimes 90's) it was even easier.  Once they got used to the sensation--more liked ADDICTED to it--taking them down the nylon road would just get easier.  Throw in an occasional blow job or fuck and it might just provide enough of a reminder that they weren't missing anything and the 2 of you could just remain in nylon tricot heaven forever.  I wish.   So, when forever comes to an end, how do they ever go back to their scratchy cotton boxer briefs?  Or even, how do they put their cotton briefs back on after a night full of nylon tricot pleasure?  By now you have gifted them some of their very own nylon tricot briefs or shorts or Speedos so it's not like they have to wait for you.  But nylon conversion, full conversion, does not seem to always remain past your relationship.  Staying friends with ex-boyfriends seldom yielded any nylon in their underwear drawer when checked (Of course I'd check, so would you!).  Was it to please their new boyfriend?  Was it they were never really into it with you?  Was it just TOO stimulating to continue with?  Did they hide all their nylon tricot where you couldn't find it when snooping? ha ha  Well, I guess all we can do is remember the good nylon times and maintain our own high standards of nylon tricot use with our own lives--and any others we might sometime get a chance to influence!  Keep the  nylon faith!

This reminds me of things he would do to me knowing that I was watching his crotch.  He was fully aware of what he was doing to me and enjoyed being sadistic to  me.

Posted by Men doin' everything in nylon tricot at 6:32 PM 2 comments:

Quarantine Greetings!  Wearing all this nylon everyday has been great!  Not much chance of anyone stopping by unannounced (not that anyone does anyway) so whatever I'm in the mood to wear and how many of them I decide to wear isn't a problem.  Not that I'm not looking forward to getting back to normal, about to start my 4th week in nylon solitude and not really complaining.  You shouldn't either since you are getting more nylon pics that you would otherwise.  In fact, last weekend I stumbled across about 150 new silkies pics--many of which are here.  I jad to do a screen grab on each one and will run them though photoshop before posting.  If they are really incredible, I will post them knowing they are a duplicate.  I'm not one of those bloggers who just keep posting the same 14 photos over and over--and there are guys out there who do that.   Feeling pretty good about unloading some nylon thoughts, theories, and turn-ons.  I see we are up to 110 members now.  I'm guessing maybe half aren't really into nylon tricot, know, or care what it is but like the pictures.   I could change that if I could get my nylon hands on you, but that's not going to happen!  It's not like I'm getting paid for how many subscribers I have and this is cheaper than a nylon shrink--although I'd probably make a pretty good one.  There is a counter for this blog and the green silkies posts are the most (and fastest) viewed.  Since I started up again this year, I think we are between 30 and 50 on the views.  I assume they only count unique visits and not each time.  I think the highest total ever is around 350.


Posted by Men doin' everything in nylon tricot at 12:11 AM 3 comments:

Fourth and Final Category of Nylon for Men: Nylon For Men

Not being cutesy or clever with the title--it's really about nylon tricot underwear for men.  As I have stated before, at some point the men who invented nylon and the men who designed underwear decided the best use of nylon underwear was on women.  Not that they would necessarily enjoy it with their internal sex organs, but the men who were enjoying the women would enjoy the nylon they were wrapped up in and enhanced by and the rest if history (unfortunately).  However, men were thrown a token bone (I doubt it would even have made a boner) with a sort of afterthought nylon underwear with the usual attributes of drying fast, not wrinkling, and the ever popular long-lasting and durable.  However, there were usually made out of ribbed nylon:  thin raised edges designed to keep them from sliding around too much and being silky--like their female counterparts were enjoying sliding all over the place.  They were usually listed at the end and at the bottom of the page after 27 pages of various cotton and wool scratchy underwear designed to make men feel like they had a real choice between scratchy, super scratchy, and sandpaper for their private male parts which must have made feeling their girl's silky nylon tricot even more appealing.  All this at a time when males were mutilated shortly after birth by cutting off their foreskin which removed tens of thousands of pleasuring nerve endings and exposing the most sensitive part of their body to said sandpaper underwear.  While the common reason given was to be able to keep the male organ clean and "prevent disease", the more widely held was to reduce the more pleasurable aspects of sliding their foreskin over their heads and having fun instead of having babies.  Who needs a woman when you have foreskin?  Real men wear cotton underwear and women wear nylon tricot was born. 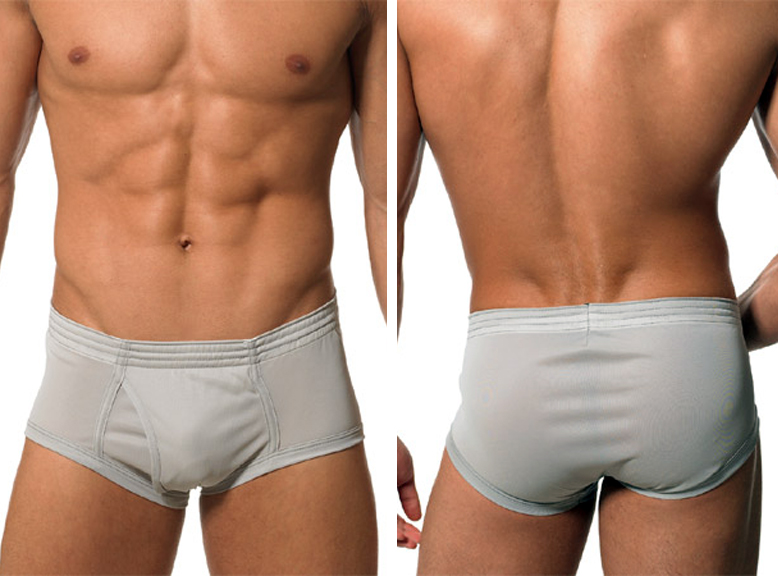 Posted by Men doin' everything in nylon tricot at 8:11 PM No comments: